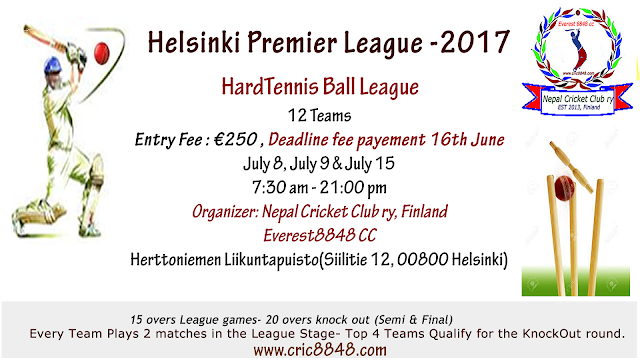 Nepal Cricket Club Ry - E8848 invites all cricket team in Finland for their participation in the first edition of Helsinki Premier League. The tournament includes league stage & knockout stage. Each team will play a minimum of two games during the league stage.
The tournament is played with a hard tennis ball. The best teams from the league stage proceed to the knockout stage. Registration is solely based on first come first service. We can accommodate a maximum of 12 teams.

Note: We urge all participating teams to play with safety and use appropriate equipment. Organizer are not liable for any injuries during the tournament. The organizer provides the first aid for minor injuries. We strongly recommend players to get H License with insurance that costs €14 and is valid for a year.