11th June Sunday, a normal day to many of us but something unusual and miracle was waiting at the MALMI CRICKET GROUND.  The toss, the weather, the cricket, everything were in favor of NORDIC WARRIORS and its captain ‘CHETAN SINGH’.

A wise decision by the captain when NW opted to bat after winning the toss. Greater Helsinki fielded with 9 men team as their 2 players were a way late. Umpire couldn't let them in as the FCA rules won't allow the players to enter the ground after 20th over. Struggling with his form throughout the year, Chetan a regular opener pushed himself to bat at no 5. Indeed it was a harsh decision by the captain himself to lower down the order which in turn yielded him the most memorable and legendary innings of his life.

NW started steadily losing 3 early wickets within 10 overs.  Arun(15) and Prabuddha(26) fetched 36 runs opening partnership before Arun felt prey to Ansar in the 5th Over.  Shishir(15) couldn’t resist the Greater Helsinki attack and was soon back to the pavillon . The legendary Chetan moved in to bat while NW was struggling for 62/3 in 10th over.

Gopal(52),and Chetan(226) sailed the drowning NW innings building a record 169 partnership for the 5th wicket.  Gopal continued his scoring momentum and  played a sensational innings hitting 3rd consecutive half-century before he felt prey to Nazir in the 26th over totaling the team score to 231/6. 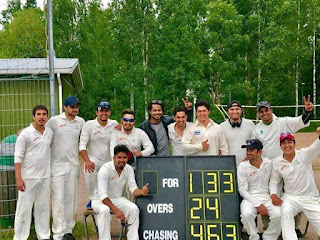 Sanju(46) the blaster towered the NW score with his 46 runs from just 23 balls with 6 huge sixes. Sanju and Chetan together build a rocketed partnership of 117 runs in just 7 overs. Sanju’s dismissal in 33rd over at 348/5 couldn’t stop Chetan’s bat clearing the ball to the boundary. Chetan smashed bowlers all over the ground like the king punishing his prisoners.

Nobody even gave a thought about the marvelous innings to prevail when Chetan scored just 5 runs from the first 13 balls he faced and NW were sobbing for just 100/3 in the 14th over. Chetan struggling with his form faced 7 dots consecutively; it was after the 13th ball when he smashed the 14th ball for the boundary and the scoring tantrum continued. Chetan harshly dominated Akram scoring 30 from an over (6,6,4,6,4,4). Chetan’s innings of 226 came to an end at 39th over. He faced 100 balls hitting 18 sixes and 23 fours.  Nordic Warriors finished off for 462/10 in 39.2 overs.

Nordic Warriors came strong in the second innings too. Greater Helsinki CC who played with the 9 men team was all out for 132/8 in 25.2 overs. Arun took 3 wickets in his spell of 3.2 overs conceding just 8 runs with a maiden over. NW won with a huge margin of 330 runs, a record in the cricket history of Finland.

Nordic Warriors 2ndXI is a Nepalese based team playing cricket in Finland.